Caren: I’ve always admired my friend and colleague Lonni Skrenter and have relied on her expertise as an exemplar high school history teacher. Lonni has wide educational experience, but mostly I know Lonni from her teaching days at Edina High School in Edina, Minnesota, an upper-middle class community with a highly regarded school system. When Lonni told me she spent her retirement winters in Belize, Central America, teaching, I had an idea. With a grant from Dr. Walter Enloe at Hamline University’s School of Education, I gladly sent Lonni a dozen copies of Sachiko: A Nagasaki Bomb Survivor’s Story to support her work. “Tell me what happens,” I said, imaging a modest school with eager 8th graders under her tutelage. The description Lonni sent back was eye-opening. Here’s Lonni’s experience in her own words.

This is the seventh winter I have volunteered at Holy Cross Anglican School on Ambergris Caye in Belize, Central America. Life is filled with serendipity, and this is one of those stories. 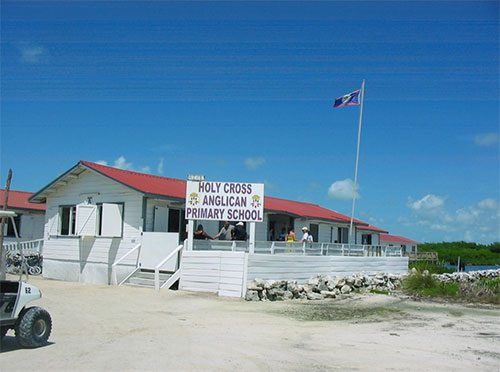 As a retired educator, I was anxious to “give back” to my new community. I didn’t have to search. I happen to know the chair of the foundation board that supports Holy Cross Anglican School. He approached me, asking that I “do something” to lead their students toward “higher education” … in this country meaning high school and maybe community college. It turned out he was asking me to volunteer in one of the poorest schools on the island. Even their best students were having trouble with the British style Primary School Exam. The Language Arts section includes writing a letter (not too hard) and writing a short story! A short story … in 50 minutes based on one of four prompts students have never seen!

It didn’t take me long to figure out that students really didn’t understand what a “story” was. Over the years, I’ve tried short story units, “recipes” for writing a short story with graded feedback. It took me awhile to realize that the basic problem was a lack of independent reading skills. In a poor school with few resources, they read in groups, often with the teacher reading aloud. Their comprehension in that situation is “fair to middling.”

When it came to the exam, where they had to read silently to themselves … they couldn’t do it. So … I came to the conclusion that what we needed to do was read whole books—books at a grade level, allowing the students to struggle on their own … ask them to create how and why questions for their classmates and teacher (me). The primary goal was simple … increase their independent reading skills so they could comprehend all the directions and paragraphs on the exit exam! I also, pie in the sky, wanted them to learn to love reading, and expand their horizons beyond the island many of them have never left. 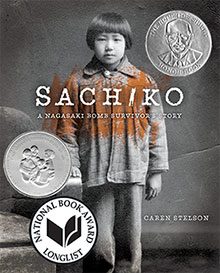 Second piece of serendipity. I had been a proofreader for Caren Stelson during the publishing of Sachiko, after working with her on the Hiroshima Exhibit at the St. Paul Landmark Center. The book seemed perfect … one main character and a clear story line. It was designed for middle school. I could acquire some books through grant money from Dr. Walter Enloe, and I bought the rest as a donation to the school … brought them down in an extra suitcase in January 2018.

The book was perfect! The fact that each student got to sign one out and take it home was special to them. It grabbed students attention and kept it. Though they struggled a bit with vocabulary, they all, when asked, rated the book highly. Only a few students said it was “just too hard” for them to read. The gray pages on WWII turned out to be absolutely critical. Although Belize helped the UK patrol the Caribbean during the war, there is nothing in students’ study regarding the war. Reading those pages generated most of the questions which seemed to be about filling gaps in students’ factual knowledge. Other questions focused on Japanese culture, which was another learning experience. Several students have asked me to bring more copies of the book so they can buy their personal copy!

I developed a basic daily plan—open with student questions, opening them to student and teacher answers. Their regular teacher was my “sidekick,” often asking questions and helping students to understand. At first I wasn’t checking their homework—bad move! Like typical eighth graders they weren’t writing it! From the third class on, I started by walking around the room with a class list, giving them checks, check pluses, and minuses. Their exam requires them to use similes, metaphors, and active verbs and adjectives. Caren’s book is filled with examples; it became part of their homework to make a list, along with phrasing how and why questions.

Students wrote some of their examples on the board, and we analyzed them. The first section I used Sachiko’s questions on the last page as the basis for an essay assessment. What is peace? How do we, as individuals, help to bring about peace? Reading the essays was painful. It was something students had not been asked to do before … and I thought it would be easier than trying to turn all or part of Sachiko into a short story! Although student essays were poor, they had some insights that warmed my heart, especially about peace. “You may say I’m a dreamer but I’m not the only person who dreams.” (Suseli Lopez) Considering the gaps in culture and generations, I doubt this young woman had John Lennon’s “Imagine” in mind, but the rest of the song quickly appeared in my mind as I read her paper. The idea that we must dream in order to truly work on world peace had depth of thought.

Another thought virtually smacked me in the face. In writing about what causes war, one student stated “they do not know what is peace and have not experience (sic) peace.” (Amtzi Pacheco) I realized that those students who desire and work for peace are working in a world that has never been without war … Although Belize is a third world country that has never experienced true war, they have cable TV. So like those of us in the US, they are confronted daily with pictures from Syria and Afghanistan.

We had discussed in class the whole idea of defining peace. We had decided that it is more than the absence of war. One student ended his definition with a powerful metaphor. “Peace is listening and understanding other people to prevent war and live in harmony. Without peace the sky would grow dark with hate.” (Yovanny Campos)

Another student ended her essay with a powerful thought. “Our World is a gift.” (Alinie August)

Because the essays were poor and because they have to write a short story for the exit exam, I ended the second section with a different assessment. Turn Sachiko into a short story, using original metaphors/similes or ones from your list. I allowed them to use their notebooks for the assessment but not the book. In class we discussed and outlined plot and character. We had a long discussion on what you would consider the climax of the book. A lot of students wanted to make it the dropping of the bomb, but a long discussion allowed everyone to conclude that the bomb was more of an introduction or hook to get you into Sachiko’s story. In the end the students decided that it was Sachiko’s decision to tell her story in public, and I basically agreed with them. I’m not at all sure this was a better assessment. A couple of students proved they had neither read the book nor paid attention to class discussion as they filled their stories with fabrications! 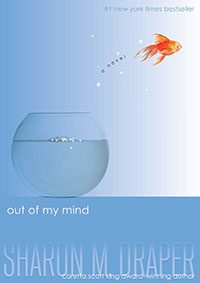 This was the first time that anyone tried this with the students in this school, and we achieved some of our goals. Students increased their ability to integrate similes and metaphors into their writing. Students’ vocabularies increased. It appeared students were more interested in the creative aspects of grammar. The teachers, principal, and I still believe that the best way to independent reading with comprehension is through books that will grab student interest, while increasing their vocabulary and comprehension. We’ve already chosen a second book, Sharon Draper’s Out of my Mind, to use with Standard V. I’ve written lesson plans for both books which teachers can use, modify etc. The principal, Mr. Griffith, and I met with all upper level teachers, and there was high “buy in” for the project. I will continue to search for high interest books that will both grab students’ interest and broaden their view of the world. Our goal is to have two books (with classroom sets) for Standards IV, V, and VI by the time we are done.

PrevPreviousCreating a School Culture of Peace: How to . . .
NextMake Way for PeaceNext