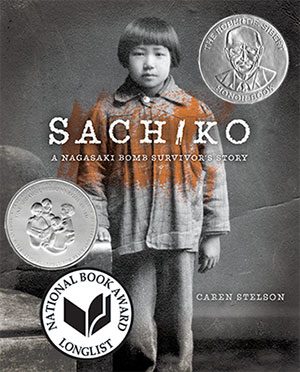 Sachiko: A Nagasaki Bomb Survivor’s Story is the 2017 winner of the Jane Addams Children’s Book Award for books for older children. When I got the phone call from Heather Palmer, chair of the Jane Addams Children’s Book Committee telling me of the award, goosebumps ran up and down my arm. Her e-letter of congratulations described the award this way:

The Addams Award is given annually by the Jane Addams Peace Association. It recognizes children’s books of literary and aesthetic excellence that effectively engage children in thinking about peace, social justice, global community, and equity for all people. We have found Sachiko: A Nagasaki Bomb Survivor’s Story to be just such a book.

I am humbled by this award and proud. The heart of Sachiko’s story and the Jane Addams Children’s Book Award couldn’t be better aligned. Every time I interviewed Sachiko Yasui, her desires for world peace and justice were unequivocal.

I continue to be gobsmacked by the awards Sachiko has garnered. When I first wrote to Sachiko Yasui in 2010, I said, “We need your story in America.” Her experience as a survivor of nuclear war and her pathways to peace have never left my heart and mind. At the time, I wondered if my letter overstated the urgency for Sachiko’s story. I needed her story. But my early statement has proven true. More than ever, we need Sachiko’s story in America—and in the world. The Jane Addams Award underscores this need.

Jane Addams, the “mother of social work,” has always been an inspirational hero of mine. Her successful settlement, “Hull House” in Chicago challenged the inequalities of the late 19th and early 20th centuries, providing leadership in community service that still could be a model for today. I was less familiar with Addams’ tireless work for peace, nationally and internationally. Addams became the first president of the Woman’s Peace Party and presided over the 1915 International Congress of Women, later the Women’s International League for Peace and Freedom. In 1931, Addams was the first American woman awarded the Nobel Peace Prize. Sachiko Yasui reached out to Helen Keller, Mahatma Gandhi, and Martin Luther King Jr. as her teachers of peace. I can well imagine Sachiko adding Jane Addams to her list of inspirational teachers.

It seems so long ago now, but on my first flight to Nagasaki, I spent 14 hours in the air nervously reconsidering my proposal to write Sachiko’s story, fearing the great possibility of failure. In those early months of the project, I often thought it was beyond my ability to capture Sachiko’s story in the way my heart had hoped. Multiple obstacles stood in my way. Perhaps the greatest was that I was an American. I represented the country that dropped the first atomic bombs in warfare on a civilian population. One of those atomic bombs detonated 900 meters from where six-year-old Sachiko Yasui was playing outside with her friends. Yet precisely because I was an American, it was crucial to try to walk in Sachiko’s shoes. More than seventy years after the atomic bombing of Hiroshima and Nagasaki, Americans must never forget the utter destruction of nuclear war and the absolute necessity for peace. One of the criteria for the Addams Award is, “How can people work with compassion, empathy and activism to advance Jane Addams’ belief that ‘true peace is not merely the absence of war, it is the presence of justice’ ”? This quote is at the heart of Sachiko.

During my phone conversation with Heather Palmer, she mentioned that a group of her middle school students had been inspired after reading Sachiko’s story to launch service projects in their community. I’m looking forward to talking with the kids to find how Sachiko’s story made a difference in their lives—and sharing what the kids say with Sachiko. This is the ultimate award. My hope in writing Sachiko was to encourage young people to understand that peace is action, that they are our next generation of peacemakers. I imagine Jane Addams and Sachiko Yasui, arm-in-arm, giving these kids a thumbs-up.

PrevPreviousLet Our Voices Be Heard
NextCan a Children’s Book Change the World?Next