Pictures from a Hiroshima Schoolyard:
A Necessary Story for Our Time 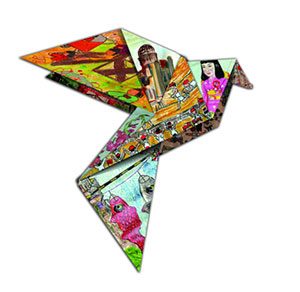 Pictures from a Hiroshima Schoolyard is a film for everyone—teachers, community leaders, people of faith, people with big hearts—and world leaders, particularly our world leaders. Pictures from a Hiroshima Schoolyard will help all of us understand the unimaginable destruction of nuclear war and the power of kindness and generosity to create pathways to peace.

The story goes like this: In 1946, A. Powell Davis, the minister of All Souls Church, Unitarian in Washington D.C., sees a photograph in the Washington Post of a proud admiral and his wife cutting a cake shaped as an atomic mushroom cloud. Incensed, Davies gives a fiery sermon titled, “Lest the Living Forget.” The sermon sets into motion a series of events that leads his congregation to send a half ton of school materials to Hiroshima. The Hiroshima school children, many of whom were orphaned by the atomic bomb, draw amazing, innocent, colorful pictures with the art materials. For some children, it was the first time they had used paints and crayons. For some, just the smell of drawing paper made them smile. The children’s pictures are sent back to the church as a thank-you, admired by many in Washington, then put away in a drawer and forgotten for years. In 1995, the drawings are rediscovered and later restored. In 2006, artist and film producer Shizumi Shigeto Manale, born in Hiroshima and resident of Washington D.C., visits All Souls Church and views the pictures. She makes it her mission to travel back to Japan to find the original artists, interview them about their memories of war and their struggle for peace, and makes a film, Pictures from a Hiroshima Schoolyard, with director Bryan Reichhardt. In 2010, All Souls church members, including Mel Hardy, now curator of the drawings, the original Hiroshima artists, and the children’s drawings are reunited in Hiroshima’s Honkawa School, the very school the survivors attended when they first received their package of art materials so long ago.

This September, the film Pictures from a Hiroshima Schoolyard came to Lanesboro, a small town of 700 in southeastern Minnesota. Sponsored by the well-respected Lanesboro Arts Center, not only was the film shown, but 24 of the 48 prints of the Hiroshima children’s drawings were exhibited at Lanesboro’s St. Mane Theatre. Best of all, Mel Hardy, the curator of the children’s drawings and Shizumi Shigeto Manale, the film’s producer, joined me in Lanesboro to share the story of the drawings and to celebrate the drama and beauty of this story.

The story of the Pictures from a Hiroshima Schoolyard brought Lanesboro together in the spirit of our collective humanity, as the story always does when shared with an audience. No one can walk away from this film without understanding that nuclear war must never happen again.

No one can sit through to the end of this film without realizing the power of small kindnesses to heal, without understanding that empathy, reconciliation and forgiveness are imperative for real peace.

All Souls Church Minister Davies was correct when he titled his sermon, “Lest the Living Forget.” We must never forget what happened to the people of Hiroshima and Nagasaki when the United States dropped atomic bombs on their cities in 1945. We must make sure that the leaders of the world never forget, either.

For more information about the film and see the trailer, go to  http://www.videoproject.com/Pictures-from-a-Hiroshima-Schoolyard.html.

For more information about Lanesboro Arts, got to https://lanesboroarts.org/